For those who don't know, MyChat Guest is a service for inviting other users to the corporate chat. They do not have to register anywhere, install the application, and remember logins and passwords. Enter the chat in one click on the link in the email or messenger.

In version 8.9 we have updated the service's engine, so now it looks like WEB chat in MyChat. Send invitations to conferences. Several different invitations are "summed up" in one interface to allow switching between private dialogues and conferences:

Previously, it was only possible to invite one person at once. In version 8.9 you can add as much as you want: 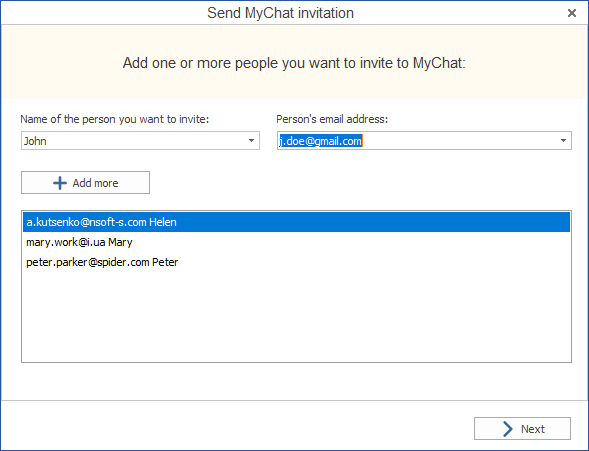 It is not necessary to specify the recipient's email. The notification about an invitation is sent to you on behalf of the bot. Copy the link and send it to a person in any other way:

As soon as the invitation is sent, the server creates a hidden conference and adds you to it. Send messages there — the invited users will see them after entering the chat: 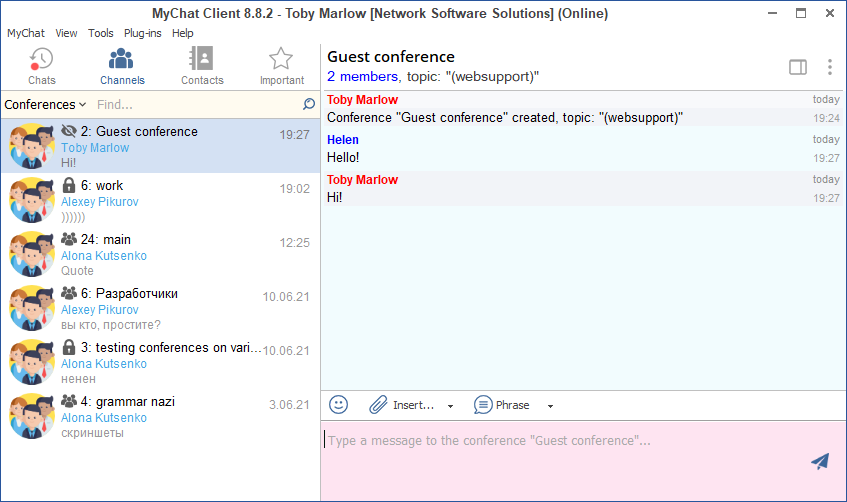 The system of rights and limitations is also improved; the appearance and accessibility of the services are flexibly configured as usual. For example, you can specify the visibility of people in a conference, and whether they are allowed voice and video calls, send files, etc.

A license is required for using MyChat Guest, but there are 25 free invitations to set up and estimate the convenience and capabilities of this service.


2. Kanban board in MyChat for Android

Now, when you create tasks in the system for Kanban project management and assign the performer, these tasks can be processed on a Android phone.

The task card color changes according to their priority. Post comments and change task stages:

Traditionally, we have added a lot of functions following the requests from our users.

Функция mSetRemoteClientCurrentPlaceID for switching the interface of the remote application on the specified section from the script on the server. A set of functions mHaltCID, mHaltUIN, mKillUIN, and mKillCID for disconnecting users from the server and force shutting down of their work. The script functions for getting the list of connections of online users by their application type and detecting an online user's identifier by the connection number.

We have made a function mJoinUserToConf, to connect users to conferences and the Integration API commandMCIAPI_CS_MediaCall to force making calls between chat users.

Look up the Help page, there are a lot of helpful scripts, created for tasks performed by our customers.

MyChat Client
[+] settings "Calls", "Accept calls from the contacts only". The configuration is disabled by default; [+] console command "Records" for opening the folder with voice and video calls records; [+] in the service MyChat Guest, invite several people at once (it is no longer necessary to specify the receiver email). The notification about the invitation is sent on behalf of the bot. Copy the link and send it in any way to a person; [*] the button in MyChat Client settings: "Settings", "Calls", "View records" for viewing media calls records; [*] interception of encoded UTF8 links from clipboard for inserting to the chat; [-] after connecting on a new computer with an old account and loading information about the conference in the chat, the author of a message displayed as "noname (UIN XX)" until moving the mouse on these entries or switching to another tool. Fixed; [-] (WEB chat) the request for approving sending notifications does not pop up. Fixed; [-] errors ID 0DFE0E14, 20B9524D; occur sometimes when relaunching the program; [-] recording calls does not work when pressing the button "record" in the plugin window (automatic recording was working, though). Fixed; [-] sometimes, after an update and repeat the launch of MyChat Client, the error #9998 is displayed. Fixed; MyChat Server
[+] (MSL) function mSetRemoteClientCurrentPlaceID for switching the interface of the remote application to the specified section; [+] (MSL) function mHaltCID for shutting down the connection; [+] (MSL) function mHaltUIN for shutting down all application instances of an online user; [+] (MSL) function mGetCIDSByClientType for getting the list of connections of online users by application connection type; [+] (MSL) function mGetUINByCID for getting the identifier of the online user by his connection type; [+] (MSL) function mJoinUserToConf for adding a user to the conference; [+] (MSL) function mKillUIN for disconnecting all connected applications of a user from the server; [+] (MSL) function mKillCID for disconnecting the connection between the server and user. [+] (Integration API) command MCIAPI_CS_MediaCall to force calls between users; [+] technology of inviting MyChat Guest users to conferences; [+] rule "MyChat Guest and WEB support", "Sending MyChat invitations for joining a conference"; [+] rule "Conferences", "Show the list of conference members"; [+] rule "Conferences", "Allow leaving text conferences"; [+] rule "Conferences", "Allow viewing the list of available conferences"; [*] (MSL) now all the modification functions of the JSON objects automatically create an empty object or array if the string is empty; [*] optimized technology of automatic deletion of inactive users + fixed minor issues with cleaning various tables in the server's databases; [*] when attempting to make a call or the call already started, and one of the users disconnects from the server at this moment — the call interrupts automatically; [*] if two subscribers perform a call, and at this moment one of them receives an incoming call from a third subscriber, both of them automatically receive a message "Busy" with the time of the call attempt; [*] if one of the subscriber's phones is not available on a mobile network or WiFi, the call is automatically interrupted; [-] the display of HTML block at the bottom of MyChat Client does not work; [-] if the Quiz is disabled, the commands still work in a specified conference; [-] error ID 674A0B56 "The specified path was not found" could occur when someone deletes the folder \data from the folder with the main module mcserv.exe in Program Files; [-] error ID 6A939429 "no such table: uin_channels" occurs sometimes when updating from a version older than 7.3; [-] error ID A1F1114B occurs sometimes when shutting down the server, and changes were saved in recent dialogues for conferences.

5. How to update to the latest version?

Both commercial and free versions are updated in the same way. The server is updated first, then the clients. In general, this process is performed automatically.